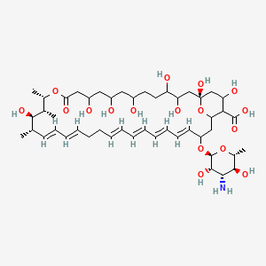 Nystatin is a polyene (class of molecules that are toxic to fungi but not to bacteria) antifungal antibiotic produced by Streptomyces noursei, with activity against Candida species, especially those responsible for vaginal infections, and widely used to treat skin and oropharyngeal candidiasis. It increases the permeability of the cell membrane of sensitive fungi and yeasts by inhibiting ergosterol synthesis S. aureus, and other Streptomyces species. In cell culture, Nystatin in combination with erythromycin and streptomycin is used to avoid fungal contamination.